MICHAL GEVA
Forms of destruction, voids of collapse, and sceneries of an unstable ground are central themes in my paintings. I use images of architecture in landscape, breaking the logic of compositional form by constructing conflicts and collisions that occur within the subject matter of my work and its process.
I am interested in the investigation of painting through the language of the planned and the accidental. Elements of control and uncertainty allow me to pursue the analogy between actual states of disintegration and the transgression of formal and stylistic boundaries in painting.
While referring to social, political, and emotional structures, my paintings give expression to an anxiety brought about by a deep-seated sense of impermanence and lack of stability. Utilizing the language of organic and structural form, my work exposes the fragility of architecture, nature, and human nature, casting doubt on the stability of Painting.
​
​ 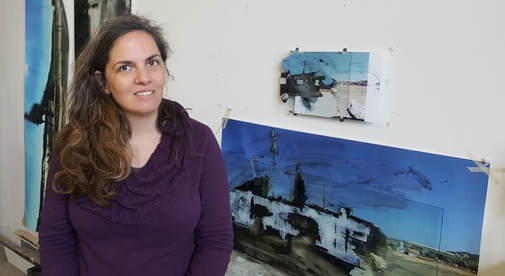 Michal Geva is an Israeli artist, based in New York. She completed her MFA in Fine Arts at the School of Visual Arts on May 2016.

Geva was born in 1980 in Kibutz Ein-Shemer, Israel. At 2003 she attended the BFA program in Gerrit Rietveld Academy in Amsterdam and completed it in Beit Berrel School of Art “Hamidrasha” in Israel by 2008. She participated the Fellowship program for young creators at "Alma Home for Hebrew Culture" during 2011-2013.